Shotokan karate started in Uniontown in the early 1960’s with Sensei Frank E. DiNunno.  His first interest in karate came when stationed at Fort Bragg in 1962. He had always been interested in “passive” sports and had held a state championship title in weightlifting in 1960. Spurred to an interest in self-defense by an assult, he studied the rudiments of the martial art Tai Chi with a fellow soldier and also studied judo and Goju Ryu style karate for some time. He then went on to study Shotokan karate with Japanese instructors at the East Coast Karate Association in Philadelphia.

Sensei DiNunno started training and teaching at the old YMCA building in Uniontown and eventually moved to Gallatin Avenue in 1963. In 1967 he moved to 62 East Fayette Street where he taught over 2,000 students over the next 15 years. In 1981, Sensei DiNunno retired from actively teaching.

In 1986, The Uniontown Karate Club was reopened by one of Sensei DiNunno’s students, James E. Umbel, after he expressed an interest in carrying on the tradition started so many years ago. For a few years the club was run out of Sensei Umbel’s garage and even some local rental halls.

In 1996, the club spent about 4 months renovating the dojo’s current location on 28 West Fayette Street. The former auto garage has 3500 square feet of training space, complete with treadmills, aerobic striders, weights, heavy bags, speed bags, stretching equipment, floor mats, makawaras, and more. These facilities combined with the martial spirit of its members continue the practices and traditions of Sensei DiNunno. 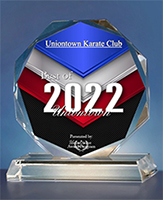